Written by Angelle Fouther from the Denver Foundation

Denver is known for its year-round sunshine. But on and around 34th and Holly in Northeast Park Hill, the sun seems to be shining even more brightly these days. There is a buzz in the air—it’s as much the sound of construction as it is the residents talking about what’s new and good in their neighborhood: the Nancy P. Anschutz Center—home to the Vickers Boys & Girls Club, Mi Casa Resource Center, and the Prodigal Son Initiative—is scheduled to open in early September.

The facility, with its modern architecture and landscaping, now sits as a part of an entire campus dedicated to the positive development of Northeast Denver’s youth. That facility, erected on the site of the former Holly Square Shopping Center, is the result of four years of community visioning and planning. It now stands as a testament to what can occur when residents come together to work towards a common goal.

Many of the youth who will attend programs at the Anschutz Center are too young to remember Holly Square, which, after being a thriving retail center for almost 50 years, was reduced to a pile of ashes through to gang-related arson in 2008. The demise of “the Holly” left a void as well as a stain on the proud community. Yet it became a catalyst prompting residents to come together to think about the future.

The 2.6 acre site was purchased in the spring of 2009 by Urban Land Conservancy (ULC) with financial support from the City’s Office of Economic Development. Strengthening Neighborhoods, a program of The Denver Foundation, and ULC came together with hundreds of community stakeholders to help guide the planning and visioning process for long-term reinvestment and redevelopment of the property. The Holly Area Redevelopment Project (HARP) was formed through these efforts.

An important aspect of the community’s vision in the search for partners to redevelop Holly Square was the creation of a safe place for the neighborhood’s youth to go after school. The Boys & Girls Clubs of Metro Denver emerged as the partner of choice.

“The exciting – really unique – aspect of this project is that it emerged from a partnership between the Boys & Girls Clubs, the Urban Land Conservancy, and the residents of Northeast Park Hill,” states Patrick Horvath, Director of Strengthening Neighborhoods at The Denver Foundation. “Resident leaders with the Holly Area Redevelopment Project interviewed all the organizations that expressed interest in developing at the site, asked hard questions, and worked with the ULC to select the Boys and Girls Club as a partner. The Boys & Girls Club, in turn, realized the enormous benefit of having a committed community partner that would work with it to ensure the project’s success.”

The Anschutz Foundation contributed $5 million toward the capital development of the Center to be named for the wife of business leader and philanthropist Phillip Anschutz. The Boys & Girls Club housed within the Center is named for longtime Club supporter Jack A. Vickers.

The Prodigal Son Initiative (PSI), a nonprofit that works to develop the leadership skills of youth and deter them from gang life, played a key role as well. Terrance Roberts, PSI Executive Director and life- long Northeast Park Hill resident, was commissioned to create positive interim uses on the site. Through community outreach, fundraising, and volunteer recruitment, PSI was instrumental in the construction of basketball courts, a Holly Mural project (which Nobel Peace Prize winner, Rigoberta Menchu Tum, came to bless), Peace Poles made from the old shopping center structure, and a futsal court. PSI offices are located within the new Center.

Built by Oz Architecture, the Anschutz Center has a very modern look, with high ceilings and energy efficient natural light. It was made to look like an “oasis in the city.” The Center includes a Social Recreation Room with pool tables, foosball and carpet bowling; an education room where youth will obtain help with homework and reading; a cultural arts room for photography and fine arts; a technology/computer lab; a commercial grade kitchen, that will be used to serve dinner in partnership with Food Bank of the Rockies; and a gym with a full length basketball court. Jason Torrez, Branch Director for the Vickers Boys & Girls Club, says “we want to offer kids the tools and the space to become successful adults.”

“I am elated for the community and for the Boys & Girls Clubs, and particularly for the impact that we are going to have on the kids and the community,” states John Arigoni, President and CEO of Boys & Girls Clubs of Metro Denver. “We designed the building with the input of the HARP steering committee, and it is truly the best and safest facility we’ve built in 52 years.” Arigoni says they are very grateful to the Anschutz family for their contribution in the name of Nancy P. Anschutz.

“There was a great interest by the community to have something that compliments the community and serves youth and families,” says Gerie Grimes, Executive Director of Hope Center and member of HARP. “The Boys & Girls Club does just that – it complements the services of the Hiawatha Davis Rec Center, Pauline Robinson Library, Prodigal Sons, Hope Center and the surrounding area.” Additionally Mi Casa Resource Center will offer a job readiness and training program at the Anschutz Center.

Eric Swan is a long-time resident of Northeast Park Hill and a City of Denver employee. He also sits on the HARP steering committee and says, “It’s invigorating to see people excited about things and working to cooperate.” He adds that the availability of a community space will provide a lot of opportunities for other groups and residents. “I hope it will foster a greater sense of community and bring people together.”

A community-wide grand opening celebration will be held in October, a month which often brings unpredictable weather to Denver. Yet, whatever conditions may arise for the occasion, one thing will be certain: the sun will be shining on 34th and Holly in Northeast Park Hill. 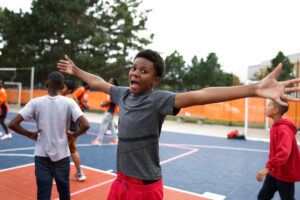